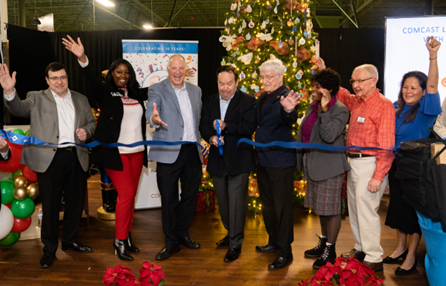 Events highlight progress made to help bridge the digital divide, expand digital literacy and build the workforce of tomorrow on the Internet Essentials Program’s 10th Anniversary

This week, Comcast in Metro Atlanta was pleased to celebrate the opening of a new Lift Zone location at Plazas Las Americas in Lilburn, as well as the 1-year anniversary of the Girls Inc. of Greater Atlanta’s Lift Zone location in Marietta. Both celebrations included surprise grant announcements and laptop giveaways to students and community partners.

Comcast has invested $185,000 in Girls Inc. of Greater Atlanta’s digital inclusion efforts since 2020. This total includes the activation of two Lift Zones in the metro area and an HGTV renovation of the Marietta Girls Inc.’s computer lab and kitchen.

On December 17, Comcast announced a surprise laptop computer giveaway for 150 community members. Of these, 50 laptop computers were distributed to the Latin American Association’s ¡Avanzando Juntas! Latina Empowerment Program and Latino Youth Leadership programs. Another 50 were given to La Tiendita, the Latin American Chamber of Commerce of Georgia’s program for small business owners and entrepreneurs. Finally, 50 student attendees of the Plaza Las Americas LIFT Zone will receive laptops.

The COVID-19 crisis has put many students at risk of being left behind and accelerated the need for comprehensive digital equity and internet adoption programs to support them. As a result, Comcast has begun launching Lift Zones in community centers nationwide to help facilitate digital literacy and academic achievement.

These Lift Zones are an important component of Comcast’s diversity, equality and inclusion (DE&I) initiatives and complement its Internet Essentials program, which has helped connect over 10 million Americans and 350,000 Metro Atlantans from low-income families to the internet at home since 2011.