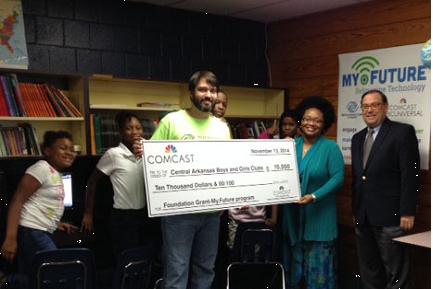 WHAT: Comcast announced today it will make a $10,000 grant to the Boys & Girls Club of Central Arkansas on Thursday, November 13.  Dozens of attendees are expected, including executives from Boys & Girls Clubs of America and Comcast, elected officials and Club members. The grant is part of the launch of My.Future, a new technology initiative that will teach Club members about the digital world and ignite their passion for technology. Comcast NBCUniversal is the Presenting Sponsor of My.Future.

At the national level, Boys & Girls Clubs of America and Comcast NBCUniversal will also announce the details of a new five-year, multi-million dollar partnership.

We are working to get your Xfinity services back online.  As power returns in your area, and it becomes safe for our technicians and restoration crews, we will … END_OF_DOCUMENT_TOKEN_TO_BE_REPLACED

In Honor of Comcast Awarding Over $100,000 in Leaders and Achievers  Scholarships to High School Seniors Across Georgia Comcast NBCUniversal today announced … END_OF_DOCUMENT_TOKEN_TO_BE_REPLACED